I can’t believe it’s November already and I’m here yet again to share the list of awesome books to be released this month that I’m dying to read!

Bea has a secret.

Actually, she has more than one. There’s her dream for the future that she can’t tell anyone—not her father and not even her best friend, Plum.

And now there’s Dane Rossi. Dane is hot, he shares Bea’s love of piano, and he believes in her.

When their passion for music crosses into passion for each other, Bea finds herself falling completely for Dane. She’s never felt so wanted, so understood, so known to her core. But the risk of discovery carries unexpected surprises that could shake Bea entirely. Bea must piece together what is and isn’t true about Dane, herself, and the most intense relationship she’s ever experienced.

The Anatomical Shape of a Heart by Jenn Bennet
Publication:  November 3rd 2015 by Feiwel & Friends

Artist Beatrix Adams knows exactly how she’s spending the summer before her senior year. Determined to follow in Leonardo da Vinci’s footsteps, she’s ready to tackle the one thing that will give her an advantage in a museum-sponsored scholarship contest: drawing actual cadavers. But when she tries to sneak her way into the hospital’s Willed Body program and misses the last metro train home, she meets a boy who turns her summer plans upside down. Jack is charming, wildly attractive . . . and possibly one of San Francisco’s most notorious graffiti artists. On midnight buses and city rooftops, Beatrix begins to see who Jack really is—and tries to uncover what he’s hiding that leaves him so wounded. But will these secrets come back to haunt him? Or will the skeletons in Beatrix’s own family’s closet tear them apart?

All the Major Constellations by Pratima Cranse
Publication: November 10th 2015 by Viking Books for Young Readers

Laura Lettel is the most beautiful girl in the world. . . and Andrew’s not-so-secret infatuation.

Now he’s leaving high school behind and looking ahead to a fresh start at college and distance from his obsessive crush. But when a terrible accident leaves him without the companionship of his two best friends, Andrew is cast adrift and alone—until Laura unexpectedly offers him comfort, friendship, and the support of a youth group of true believers, fundamentalist Christians with problems and secrets of their own. Andrew is curiously drawn to their consuming beliefs, but why? Is it only to get closer to Laura? And is Laura genuinely interested in Andrew, or is she just trying to convert him?

Reagan Forrester wants out—out of her trailer park, out of reach of her freeloading mother, and out of the shadow of the relationship that made her the pariah of Charytan, Kansas.

Victoria Reyes wants in—in to a fashion design program, in to the arms of a cute guy who doesn’t go to Charytan High, and in to a city where she won’t stand out for being Mexican.

One thing the polar-opposite best friends do agree on is that wherever they go, they’re staying together. But when they set off on a series of college visits at the start of their senior year, they quickly see that the future doesn’t look quite like they expected. After two years of near-solitude following the betrayal of the ex-boyfriend who broke her heart, Reagan falls hard and fast for a Battlestar Galactica-loving, brilliant smile-sporting pre-med prospective… only to learn she’s set herself up for heartbreak all over again. Meanwhile, Victoria runs full-speed toward all the things she thinks she wants… only to realize everything she’s looking for might be in the very place they’ve sworn to leave.

As both Reagan and Victoria struggle to learn who they are and what they want in the present, they discover just how much they don’t know about each other’s pasts. And when each learns what the other’s been hiding, they’ll have to decide whether their friendship has a future.

One HELLO? can change a life. One HELLO? can save a life. Tricia: A girl struggling to find her way after her beloved grandma’s death.
Emerson: A guy who lives his life to fulfill promises, real and hypothetical.
Angie: A girl with secrets she can only express through poetry.
Brenda: An actress and screenplay writer afraid to confront her past.
Brian: A potter who sets aside his life for Tricia, to the detriment of both.

Linked and transformed by one phone call, Hello? weaves together these five Wisconsin teens’ stories into a compelling narrative of friendship and family, loss and love, heartbreak and healing, serendipity, and ultimately hope.

The Lies About Truth by Courtney C. Stevens
Publication: November 3rd 2015 by HarperTeen

Sadie Kingston, is a girl living in the aftermath. A year after surviving a car accident that killed her friend Trent and left her body and face scarred, she can’t move forward. The only person who seems to understand her is Trent’s brother, Max.

As Sadie begins to fall for Max, she’s unsure if she is truly healed enough to be with him — even if Max is able to look at her scars and not shy away. But when the truth about the accident and subsequent events comes to light, Sadie has to decide if she can embrace the future or if she’ll always be trapped in the past.

For The Record by Charlotte Huang
Publication:  November 10th 2015 by Delacorte Press

Chelsea thought she knew what being a rock star was like . . . until she became one. After losing a TV talent show, she slid back into small-town anonymity. But one phone call changed everything

Now she’s the lead singer of the band Melbourne, performing in sold-out clubs every night and living on a bus with three gorgeous and talented guys. The bummer is that the band barely tolerates her. And when teen hearthrob Lucas Rivers take an interest in her, Chelsea is suddenly famous, bringing Melbourne to the next level—not that they’re happy about that. Her feelings for Beckett, Melbourne’s bassist, are making life even more complicated.

Chelsea only has the summer tour to make the band—and their fans—love her. If she doesn’t, she’ll be back in Michigan for senior year, dying a slow death. The paparazzi, the haters, the grueling schedule . . . Chelsea believed she could handle it. But what if she can’t?

Until We Meet Again by Renee Collins
Publication: November 3rd 2015 by Sourcebooks Fire

Cassandra craves drama and adventure, so the last thing she wants is to spend her summer marooned with her mother and stepfather in a snooty Massachusetts shore town. But when a dreamy stranger shows up on their private beach claiming it’s his own—and that the year is 1925—she is swept into a mystery a hundred years in the making. As she searches for answers in the present, Cassandra discovers a truth that puts their growing love—and Lawrence’s life—into jeopardy. Desperate to save him, Cassandra must find a way to change history…or risk losing Lawrence forever.

Seventeen-year-old Rose Levenson has a decision to make: Does she want to know how she’s going to die? Because when Rose turns eighteen, she can take the test that will tell her if she carries the genetic mutation for Huntington’s disease, the degenerative condition that is slowly killing her mother. With a fifty-fifty shot at inheriting her family’s genetic curse, Rose is skeptical about pursuing anything that presumes she’ll live to be a healthy adult—including going to ballet school and the possibility of falling in love. But when she meets a boy from a similarly flawed genetic pool, and gets an audition for a dance scholarship in California, Rose begins to question her carefully-laid rules.

After Gabi’s relationship with her long-time boyfriend Max falls apart, she just needs to get away—and she finds the perfect escape in a summer internship for her favorite TV show in London. All the gorgeous actors in the cast will more than distract her from the Break-Up.

Then she meets Spencer Black: student, show extra, expert flirt. Spending time with him is fun, intoxicating, and uncertain. Their relationship is heating up when he lands a featured role on the show. Will his newly found fame break them apart, or is Spencer the one?

How to Be Brave by E. Katherine Kottaras
Publication: November 3rd 2015 by St. Martin’s Press

Reeling from her mother’s death, Georgia has a choice: become lost in her own pain, or enjoy life right now, while she still can. She decides to start really living for the first time and makes a list of fifteen ways to be brave – all the things she’s wanted to do but never had the courage to try. As she begins doing the things she’s always been afraid to do – including pursuing her secret crush, she discovers that life doesn’t always go according to plan. Sometimes friendships fall apart and love breaks your heart. But once in a while, the right person shows up just when you need them most – and you learn that you’re stronger and braver than you ever imagined.

The Girl with the Wrong Name by Barnabas Miller
Publication: November 3rd 2015 by Soho Teen

Seventeen-year-old Theo Lane has been hiding half of her face from the public ever since “The Night In Question,” a night that left her with a long, disfiguring scar, an unquiet mind, and no memory of what happened. An aspiring documentary maker, she uses her camera to keep the world at a safe distance, shooting hours of secret footage with a hidden button cam on her jacket collar. But when Andy Reese, a forlorn and mysterious “Lost Boy,” wanders into her frame, he becomes the unknowing star of her latest project. Her unhealthy obsession with him tears her from that sheltered life behind the camera, pulling her into a perilous, mind-bending journey through Andy’s world. But is it really Andy’s world she’s investigating? Or is it her own?

Everything But the Truth (If Only… #6) by Mandy Hubbard
Publication: November 17th 2015 by Bloomsbury USA Childrens

Holly Mathews’ mom is the new manager of a ritzy retirement home, and they just moved in. But having super-rich retirees as her only neighbors isn’t a total bust, because the gorgeous, notorious Malik Buchannan is the grandson of a resident. Just one problem: when they meet, Malik assumes Holly is there to visit her own rich relative. She doesn’t correct him, and it probably doesn’t matter, because their flirtation could never turn into more than a superficial fling . . . right? But the longer she lives in his privileged world, the deeper Holly falls for Malik, and the harder it is to tell the truth . . . because coming clean might mean losing him.

Share your November TBR in the comments!
Thanks for stopping by!

Cover images link out to respective Goodreads page. Click and add them to your shelves. 😉 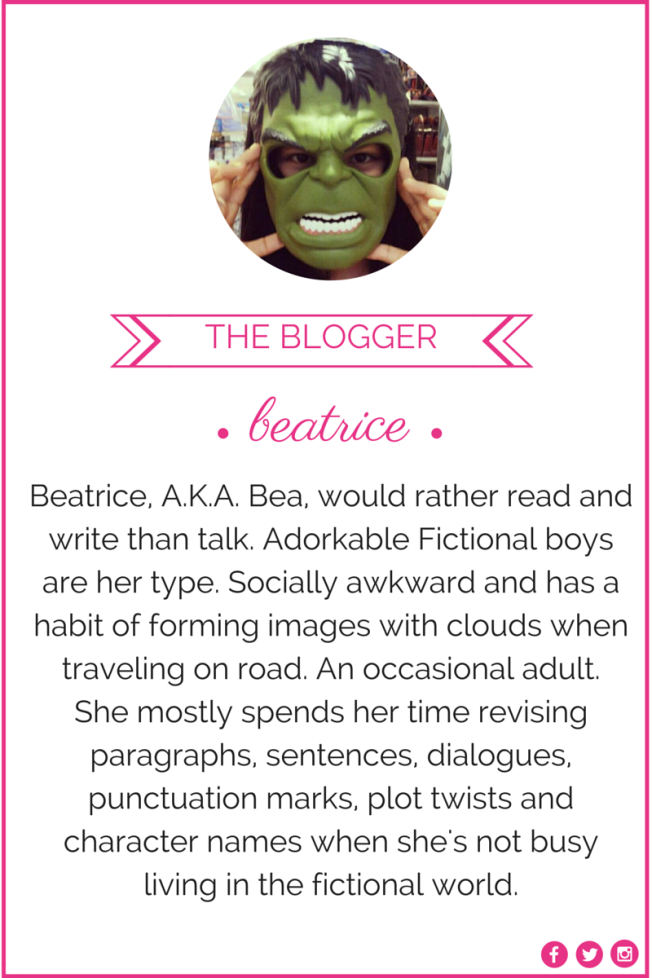