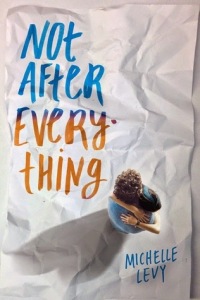 Find out who inspired Author Michelle Levy in writing her debut novel and more about Not After Everything in this Q & A. Plus, don’t miss the chapter teaser from the book and a Giveaway! 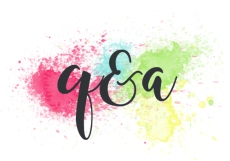 How did you come up with the title Not After Everything?

It wasn’t easy. I went through three title changes. Between my agent, my editors, and me, we had 245 potential titles to choose from—I still have the list! Not After Everything came from a line in the book. I wish I could take credit, but that was one of my editors’ suggestions.

Aside from being a YA Author, you’re also a casting director (which is really awesome, btw!), so, if you were to cast someone to play as Tyler and Jordyn, let’s say in a movie, who are your top picks?

I find that casting my characters really helps me get their voices right. I cast Dylan O’Brien (Maze Runner) as Tyler in the early stages of drafting. And Malese Jow (Vampire Diaries) was the inspiration behind Jordyn before I even began writing. I still have their pictures on my corkboard, though they’ve been pushed to the side to make way for my next set of characters.

How was your experience writing in the perspective of a 17 year old male?

It was interesting for sure. Lucky (or unlucky) for me I have an over-sharing younger brother who provided me with more than enough (too much!) insight into the male psyche. And he still acts like he’s seventeen, so that made it even easier. 🙂

Is there a particular character in your novel that you see yourself in? If yes, who and why?

The character that’s the closest to me is probably Dr. Dave, Tyler’s psychiatrist. I’m fascinated with psychology and probably would have gone in that direction if I hadn’t become a casting director.

Have you always seen yourself becoming writer in the contemporary genre?

Actually, Not After Everything was my first attempt at contemporary. Before that I had written two urban fantasy and two paranormal manuscripts. I might come back to one or two of those one day, but for now I’m really enjoying writing contemporary.

What/Who inspired you to write Not After Everything?

Tyler did. His voice just came into my head one day. He was angry and broken and I absolutely had to know what made him that way.

Are you currently working on a new project?

I’m working on another contemporary about the psychological effects of bullying.

Not After Everything
By Michelle Levy

A thick, pink-polished fingernail strikes the edge of my desk— two succinct taps—and I look up from my poetic masterpiece, right into Mrs. Hickenlooper’s eyes. They bulge like her three hefty chins are trying to choke the life out of her.

I return to scratching the letter S into the top left corner of my notebook. “I assume that’s rhetorical.”

“Out.” She juts her talon in the direction of the door, as if I’m too stupid to locate it myself.

I feel another sarcastic remark bubbling up, but I swallow it back as I casually finish the last of my scratching.

Now F-U-C-K T-H-I-S will be visible in the top margin of at least the next thirty sheets of notebook paper. I know it isn’t particularly clever or imaginative, but I smile all the same. Then I calmly collect my belongings and stroll out of AP macroeconomics, unsure how, exactly, being forced to leave all this is a punishment. She expects me to report to the guidance counselor’s office like she has the last three times, but of course I won’t.

I drift down the mostly empty hallways until . . . I don’t know, whatever. Truthfully, I kind of hope the asshole hall monitor will find me and dole out some sort of actual punishment.

“’S up, Tyler?” one of my old teammates says as I pass the gym. Before, I would have taken my frustrations out on the weights. Now it just seems so stupid. I nod a greeting to Ted and continue walking.

Time’s not the same as it used to be, and suddenly the hall- ways are filled with people I used to be able to stand. I never even heard the bell. I have AP chem now, but it doesn’t really matter if I show up. Mr. Waters wouldn’t dare fail me. Even crusty Mrs. Hickenlooper will probably still give me an A. I wish she wouldn’t. I wish they would all stop tiptoeing around me just because my mom offed herself over the summer.

Michelle Levy hails from Denver, Colorado and now lives in Los Angeles, California, where she works as a casting director for film and television, casting for such projects as Six Feet Under, Deadwood, Bruce Almighty, and more. Not After Everything is her debut novel.

Tyler has a football scholarship to Stanford, a hot girlfriend, and a reliable army of friends to party with. Then his mom kills herself. And Tyler lets it all go. Now he needs to dodge what his dad is offering (verbal tirades and abuse) and earn what his dad isn’t (money). Tyler finds a job that crashes him into Jordyn, his former childhood friend turned angry-loner goth-girl. She brings Tyler an unexpected reprieve from the never-ending pity party his life has become. How could he not fall for her? But with his dad more brutally unpredictable than ever, Tyler knows he can’t risk bringing Jordyn too deeply into the chaos. So when violence rocks his world again, will it be Jordyn who shows him the way to a hopeful future? Or after everything, will Tyler have to find it in himself?

Purchase links for Not After Everything:
Amazon | Barnes & Noble | Books-A-Million | IndieBound

GIVEAWAY!
Win an ARC of NOT AFTER EVERYTHING by Michelle Levy
Open to US Residents only.

5 thoughts on “Author Interview | Michelle Levy ft. Not After Everything) + Excerpt + Giveaway”